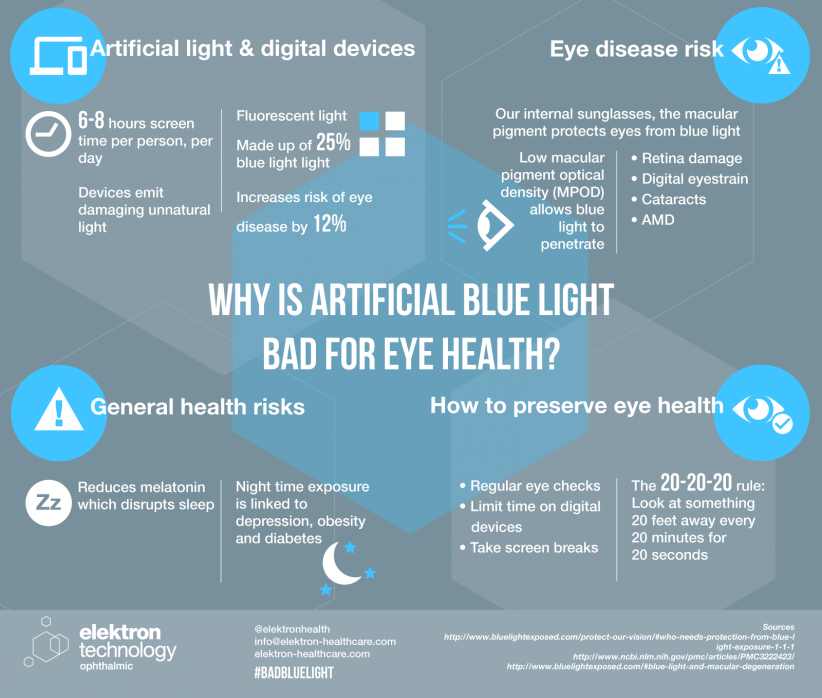 As a society, we do not yet know the long term affects that this will have on our general health and the health of our eyes. What we do know is; shortwave length blue and purple light is harmful to our eyes and this is the reason we protect our eyes from the sun!

So, why not protect our eyes from the harmful effects of this blue light that we get from our devices?

Wearing sunglasses when we are indoors looking at a device is impractical, however we have other options. At our office, we have two coating which help block out bad blue light, Seecoat Blue (Nikon Lens) and Recharge (Hoya Lens). These both block out a portion of the harmful shortwave length blue and purple light. Now, we do not want to cut out blue light entirely as that would have a deleterious effect on our sleep patterns and vision. However, about a 30% reduction helps with our sleep patterns and cuts out a lot of the harmful blue light. As well, this amount of reduction will not affect our vision and the way we perceive colours.

There are other ways to help reduce the amount of exposure to harmful blue light, but this involves reducing the amount of “screen time” which is hard in a world where we all work on screens and live on our smart phones. 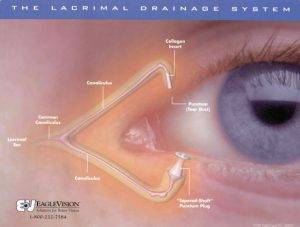 Punctal plugs are small biocompatible devices that are inserted into the tear duct of the eyelids to block drainage. This is kind of like putting a stopper in the sink or bathtub to prevent drainage. What occurs on the eyes (as in the bathtub or sink), is the water does not drain out as quickly so there are more natural tears and moisture on the eyes. This helps with dry eyes by helping to keep more of your natural tears on your eye, to keep it lubricated. Inserting punctal plugs is a non-invasive and quick in office procedure. The plugs we use are semi-permanent, they usually last 3-6 months (if not longer) and are easily removable if necessary.

Dry eye disease can be a debilitating condition for some and can severely affect their quality of life. Punctal plugs are not the solution for everyone with dry eyes disease, as there are multiple causes of dry eye disease, however it can be very beneficial for some patients. After doing a dry eye assessment, your doctor would be able to tell you if punctal plugs are the right choice for you. At our office, we insert punctal plugs in office on patients who are good candidates for plugs. We usually follow up with patients a few times to year to monitor how their plugs are working and to monitor their dry eye disease. Once inserted they tend to reduce reliance of artificial tear drops and help improve the patient’s quality of life.

If you are interested in punctal plugs or a dry eye assessment or would just like more information about either of these topics, please contact our Ancaster optometrist’s office our staff and doctors would be happy to help you. 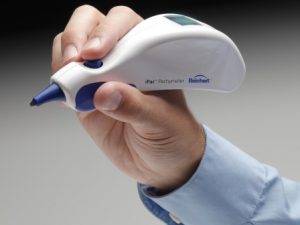 A Pachymeter is a medical device used to measure the thickness of the cornea. Pachymetry, the corneal thickness measurement, has a number of uses in comprehensive Optometric care.

Modern devices use ultrasound technology, while earlier models were based on optical principles. The ultrasonic Pachymeters traditionally have been devices that provide the thickness of the human cornea in the form of a number in micrometres that is displayed to the user. The newer generation of ultrasonic pachymeters work by way of Corneal Waveform (CWF).

Using this technology the user can capture an ultra high definition echogram of cornea, think of it as a corneal A-scan. Pachymetry using the corneal waveform allows the user to more accurately measure the corneal thickness, have the ability to check the reliability of the measurements that were obtained, have the ability to superimpose corneal waveform to monitor the change of patients cornea over time, and ability to measure structures within the cornea such as micro bubbles created in the cornea during femto-second laser flap cut.

Pachymetry is extremely important in determining whether laser eye surgery (PRK, LASIK or Intralase) is suitable for a patient. No matter which type of refractive laser surgery is performed, corneal tissue is removed in the re-contouring of the cornea. The higher the prescription, the more tissue removed. Naturally, there must be a limit to the amount of tissue removed. Pachymetry allows us to determine if a patient has enough tissue to safely have laser surgery.

Corneal pachymetry is an important test in the early detection of certain types of glaucoma. It also can be used in the screening of Keratoconus, a progressive corneal condition.

Our Ancaster Optometrist office prides itself on being a progressive optometry office with state of the art equipment and technology. We embrace new technology and advances in eye health, while providing the highest level of care and a pleasant environment for our patients. 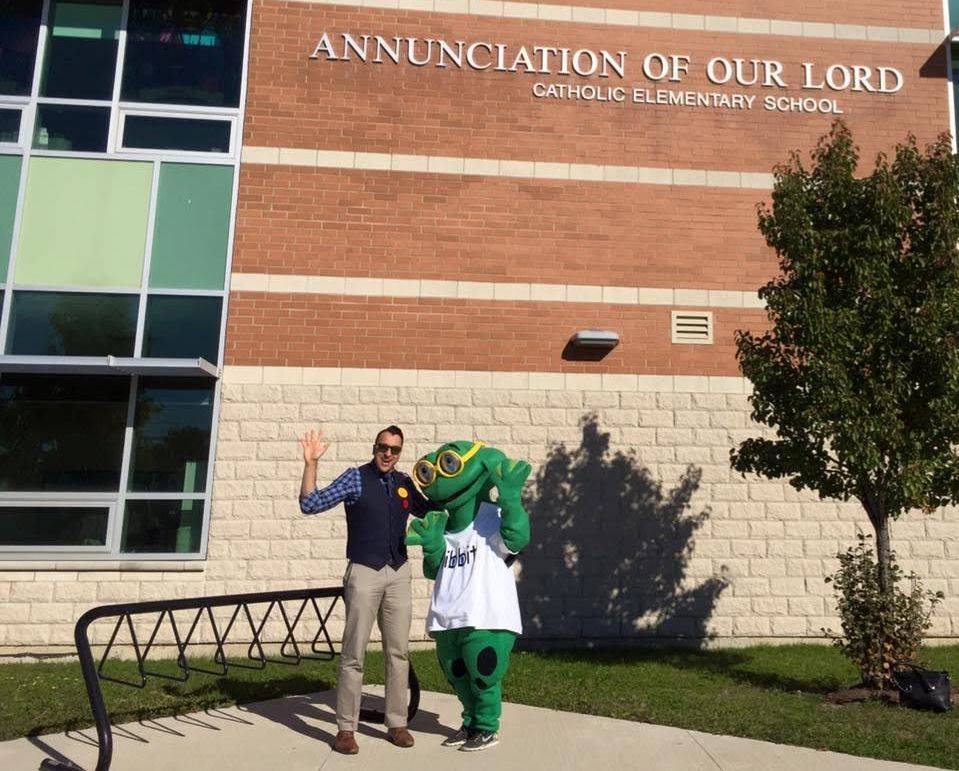 Dr Singh, Dr. Maharaj and Fribbit were visiting Annunciation of our Lord in Hamilton Ontario last week. They were giving a presentation to JK kids about the Eye See Eye Learn (ESEL) program! We would like to remind everyone that kids under 19 are covered for eye exams by OHIP yearly and if they are in JK they are eligible for a free pair on spectacles at a participating ESEL office! Approximately 80% of learning is through our visual system, thus it is so important for children to have their eyes examined before entering school and definitely in JK. Unfortunately, we know about 1 in 4 children have a problem with their visual system and are thus hindered in their ability to learn.

The Eye See Eye Learn (ESEL) program is a partnership between the Ontario Association of Optometrists (eye doctors), the Provincial Government, Nikon (lenses) and OGI (frames).

It is recommended that a child’s first eye examination should be an infant examination at 6 months of age and then every year thereafter until the age of 20. An exam can be done with your child whether they know their letters(alphabet) or not. We also cannot forget that an integral part of a pediatric eye examination is checking their ocular health, to ensure the child vision is good today and that it will remain so in the future.

Our office offers same day or next day appointments for all ocular emergencies for children, whether they are suffering with “pink eye” or have had an injury. This saves time spent in waiting rooms either at the ER or the walk in clinics. As well, for “pink eye” our doctors can correctly determine the cause, whether it is a viral or bacterial infection, an allergic reaction or inflammation from a systemic condition.

If you have any questions about pediatric eye care or the ESEL please feel free to contact our office. 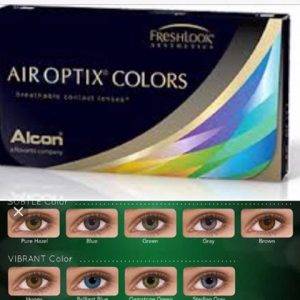 Have a happy Halloween from the team at Ancaster Family Eyecare!

Attention: We will be closed on New Year’s Eve (December 31st)

Please note that any pick up order, adjustments, eye exams and frame selection are by appointment only.

Of course if you need to contact the office about any emergency matters during this time please email us at reception@ancasterfamilyeyecare.com with details and we will get back to you as soon as possible. These emergencies would include sudden changes to vision or ocular injuries. We will also be checking our voicemails on a regular basis.

Thank you for your understanding, we are looking forward to seeing you soon.